Noida: 70 delegates from 35 countries of the World attended the media and entertainment summit organized by ICMEI at Noida Film City. International Chamber of Media And Entertainment Industry invited delegates to emphasize on Love, Peace And Unity Through Art And Culture.

â€œInternational Chamber of Media And Entertainment Industry is supporting the vision of Prime Minister of India Shri Narendra Modi of Uniting the World. We are promoting our relations with all the countries of the World through art, culture, Cinema, Fashion, tourism and education,â€ said Sandeep Marwah in his opening speech.

â€œI am amazed to see the kind of work Sandeep Marwah and his organizations are doing to promote art, culture and world relations that is beyond the thinking of an individual. United Kingdom has always believed in World Unity,â€ said Prof. Ronan Paterson Head Media Teesside University.

â€œThe M&E Summit has brought 35 countries together at Marwah Studios which will go into the books of History of Noida. ICMEI is working towards the goals of United Nations,â€ added Dr. Rishi Raj Singh Director, Ministry of Skill Development, Government of India.

â€œThis is my first visit to India and I am now proud of Marwahs in India,â€ said Dr. Marwa Mahdi Hadi Al Salihi from Iraq. I am happy to learn that there is already an Indo Afghanistan Cultural Forum working so well from Noida,â€ said Pamir Khan Pasoon delegate from Afghanistan. â€We are thankful to AAFT for given large number of filmmakers to Bhutan,â€ said Ugyen Bidha from Bhutan.

Sandeep Marwah presented life membership of World Peace Development And Research Foundation to every delegate along with the memento of Global Media and Entertainment Summit 2017. During the summit Sandeep Marwah has been nominated and awarded by all the delegates as the Global Cultural Minister for his untiring contribution to World Unity.

Mon Feb 20 , 2017
Noida: Once again the popularity and the hard work of Sandeep Marwah brought him to the limelight internationally when he was nominated and awarded as Global Cultural Minister during Global Media And Entertainment Summit at Noida Film City. Delegates from Haiti, Bhutan, South Sudan, Niger, Nigeria, Tanzania, Bangladesh, Afghanistan, Sri […] 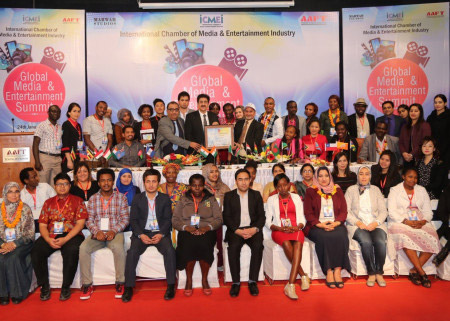