New Delhi: â€œLove and Sincerity towards your profession, will to win the World and hard efforts towards your goal creates Shah Rukh Khans in this World. From no where to the king of Bollywood, he has been inspiration for millions,â€ said Sandeep Marwah President of Marwah Studios at a well-attended function titled An Artistic Retrospective of Shah Rukh Khan-Star of The Millennium by Anjana Kuthiala at Hotel Vivanta-Ambassador at New Delhi.

â€œI saw his Punctuality, regularity, dedication and large cooperation to costars during the making of Mani Rattnamâ€™s feature film Dil Se at Marwah Studios shooting with Manisha Koirala, Santosh Shivam when 9 sets were created at the Studios way back in nineties,â€ added Marwah

â€œIndia has a huge film industry but all these qualities including huge respect for women and other religions has made Shah Rukh Khan just the King,â€ Marwah recollects many instances of SRK a brand.

Tue Jan 24 , 2017
Noida: International Chamber of Media And Entertainment Industry and Indo Czech Republic Film And Cultural Forum declared a first ever scholarship in film course for the deserving student from Czech Republic. Asian Academy of Film And Television announced a Scholarship for three months short-term course along with boarding and lodging […] 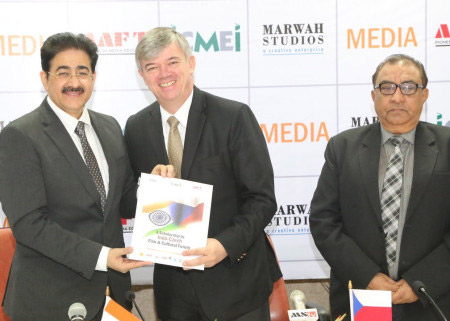