More than 20,000 people from Goa and all over India attended the event under the banner Vandematram for the national unity and integration.

Sandeep Marwah is five times World record holder in media, has brought 60 international awards to the country, has been a founder of Noida Film City, Marwah Studios, Asian Education Group and chairing around 100 film, television, media, social, art and culture organizations, citation read by the organizers.

â€œI am proud of Sandeep Marwah for his passion and enthusiasm when it comes to social awareness. His efforts have brought him many laurels. He has been a source of inspiration for millions of people in India and abroad,â€ said Sadguru Bharhmeshanand acharya Swamiji Maharaj.

â€œI feel more responsible towards my nation and extend my heartiest thanks to the residents of Goa who all have shown so much of love and respect on my visit to Goa,â€ said Sandeep Marwah accepting the award.

Tue Jan 24 , 2017
Goa: The Chief Minister of Goa honored Sandeep Marwah with a shawl and a flower bouquet on his visit to the Chief Ministers office at Goa. â€œThe country of India is proud to have sons like Sandeep Marwah. He is not only patriotic and nationalist but has work tremendously and […] 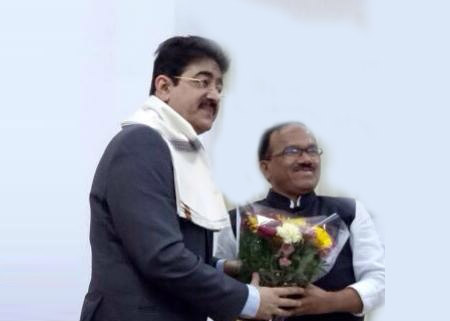