A replica of United Nations and Security Council was erected in five different halls of Marwah Studios. The rules and regulations and its proceedings were taught and learned during the two days summit.

â€œThe purpose of United Nations is to bring in love, Peace and Unity in the World. It is the highest International parliament where largest number of countries are participating for the common cause of Peace and human activities,â€ said Sandeep Marwah President of Marwah Studios while inaugurating the summit.

Later students were presented with participation certificates and special awards for best questions and answers. The event was supported by AAFT- Asian Academy of Film And Television, ICMEI- International Chamber of Media And Entertainment Industry and IFUNA- Indian Federation of United Nations Organizations.

Tue Jan 24 , 2017
New Delhi: Sandeep Marwah is the World Record Holder in sports- His involvement with 10th Commonwealth Games Delhi was tremendous. Not only he has provided media assistance to foreign journalists during that time he has created a wonderful record for himself too. â€œMarwah covered Queenâ€™s Baton Relay from Wagha Border […] 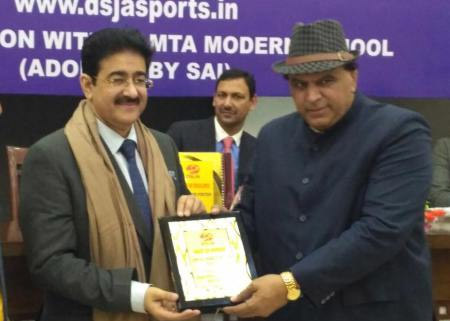