â€œMore than three hundred thousand interactions and inquiries have taken place in last two months for this unique first ever film festival related to mobile phones. The world is excited about the show,â€ said Sandeep Marwah President of the festival introducing the birth of the IFCPC.

â€œI am proud to be associated with this festival from the day one. It is the result of a joint film which was short in 2006 in Noida and balance in New York in 2007. The first ever film festival of the Universe on cellphone cinema has grown big in 10 years,â€ added Prof Karl Bardosh Master Professor in Kanbar Film School, Tisch School of Arts, New York University, USA.

â€œWhat A pleasure to know so much about not only the festival but the activities of Marwah Studios. The festival is a full fledged promotion of Mobile Industry. In last so many years it must have generated huge demand for the mobile phone. I appreciate the uniqueness and innovative ideas of Sandeep Marwah,â€ said Gopal Jiwarjika President of PHD Chamber of Commerce and Industries.

â€œThe importance of Cellphone we realized when we used the shooting material in our feature film shot by Mobile phone, and could not find the difference. It is a wonderful tool to learn different aspects of film making,â€ said Pankaj Parashar renowned film director lately famous for his feature film Banaras.

â€œI am ready to support and need affiliation from Marwah Studios to raise the level of events on art and culture like this international festival,â€ expressed Dr. Mridula Tandon President of NGO Sakhshi.

â€œIt is a great achievement for the Republic of India to initiate a festival of this kind and so different to promote art and culture,â€ said Mike Berry Jury Member of Cannes International Festival and Emmy Musical Awards.

Earlier a solo show of Mehar Juneja was also inaugurated by all the dignities with 35 colorful paintings depicting spirituality and waves quite related to the festival.

Tue Jan 17 , 2017
Noida: â€œTime has come when 250 million smart phones out of one billion mobile connections in India are going to be the biggest territory of feature films. The charge of ten rupees per film will bring a collection of two billion rupees for every successful film soon,â€ predicted Sandeep Marwah […] 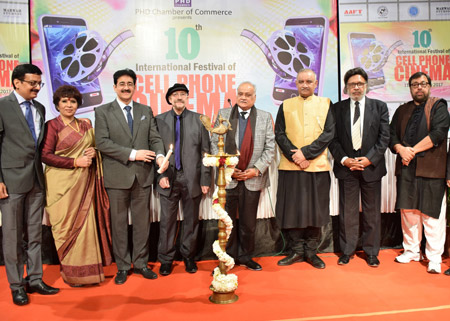