Noida: The exclusivity and enthusiasm of Marwah Studios once again brought the 9th Edition of Global Film Festival Noida. The festival is not only the biggest in North India but has been rated as one of the most happening festivals of the World.

The grand opening of the festival, this time, designed in two major segments, one by the renowned film star and politician Shatrughan Sinha and other by the Hungarian Ambassador to India, H.E. Gyula Petho, at Noida Film City.

â€œFilms are the Ambassador of culture of the country and film festivals are the platform to showcase that culture. The purpose of the Global Film Festival is to bring in Love Peace and Unity through art and Culture,â€ said Sandeep Marwah, President of Marwah Studios and GFFN.

â€œWhat a great idea of the festival to cater to the young population of the World and also bringing them together through cinema is quite a unique idea. I admire the organizing capacity of the festival where 52 events have been planned in just three days.â€ said Shatrughan Sinha, appreciating and congratulating the management of the festival while lighting the inaugural lamp.

â€œThere was a time when we used to spend all our pocket money only in watching cinema during festivals. Now, it is available in your campus. Learn from all the activities of the festival as this is the real industry,â€ said T.S. Nagabharana, renowned Director of Kannada Films and nine national award winners.

Fri Dec 2 , 2016
Noida: â€œPractice makes man perfect, deep love and passion for your profession gets you success. Continuous efforts will take you to a higher position,â€ said Padmashri Vidya Balan, renowned actor of Indian film industry here at Marwah Studios talking to the students of Asian Academy of Film And Television and […] 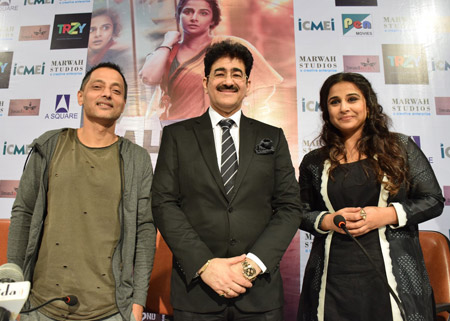