Noida: â€œEducation is the key to progress and only literacy can eradicate most of the problems from the society. Letâ€™s work together to educate the mankind,â€ said Sandeep Marwah renowned educationist and media person, while inaugurating the international meet on education at Marwah Studios, film city Noida, in the capacity of Chairperson of the summit.

A well-attended meet by the delegates from 23 countries of the World -Global Education Summit had taken place to discuss the new ways and methods of education to reach the students directly and interestingly.

â€˜We have to learn a lot from the Republic of India, especially love, peace and unity,â€ said Amii Josue Frederick from Democratic Republic of Congoâ€. â€˜India and Russia have already introduced many subjects like Sanskrit and yoga as part of education,â€ said Inna Levchenko from Russia.

â€œEducational centers like AAFT are international seats of learning where many countries can take advantage of world class education at most economical price,â€ said Mardzhonai Bakhriddin from Tajakistan. â€œThe education and training at AAFT helped a student from Botswana to become one of the most popular directors of a TV station back home; that speaks of the deep involvement of education system,â€ said Dipopo Debby Mmopi from Botswana.

A case study of Sandeep Marwah, President Marwah Studios, with five world records, and 60 international awards was also discussed at the Summit. Marwah is also chairing 90 international and national organizations in different capacities.

Ministry of Skill Development, Ministry of External Affairs, Government of India, International Chamber of Media and Entertainment Industry and Asian Academy of Film And Television supported the summit. Sandeep Marwah honored delegates with the life membership of World Peace Development and Research Foundation.

Later Sandeep Marwah was honored jointly by the delegates of 23 nations of the World as the Global Cultural Minister and was also declared as the Saint of the Modern Times.

Mon Nov 28 , 2016
Noida: The excitement and enthusiasm of young film makers from all over India and abroad created a new energy in the ninth Global Film Festival Noida 2016 at Marwah Studios, Noida Film City. The festival was inaugurated by H.E. Gyula Petho, Ambassador of Hungary to India with the lighting of […] 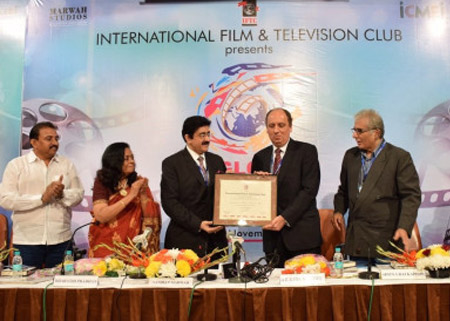