Noida: The 2nd Global Literary Festival has been announced and 22nd to 24th September are the dates for the same. The festival is international in nature and expects participation from all over the World.

â€œWhat a pleasure to host this grand event at Marwah Studios at Noida film City. The first edition last year in 2015 had created a powerful buzz in this part of the World,â€ said Sandeep Marwah President of 2nd Global Literary Festival Noida 2016.

A well-known former diplomat from the foreign service and educationist from Nigeria Sam Worlu at the campus of Marwah Studios released the first poster of 2nd Global Literary Festival Noida 2016.

â€œI am honored to be part of this international festival. I know the involvement of Sandeep Marwah and his dignified position in Nigeria. It is a pleasure to be part of his innovations,â€ said Sam Worlu assuring participation from Nigeria.

We have to Learn A lot in Tourism-Sandeep Marwah

Tue Sep 13 , 2016
Rome: â€œThe biggest attraction in Rome is the preservation of historical monuments and its use in day to day affairs. They are the best source of income and adds huge tourism to Rome,â€ said Sandeep Marwah Managing Director of NFTC talking to the people from tourism industry at Hotel St. […] 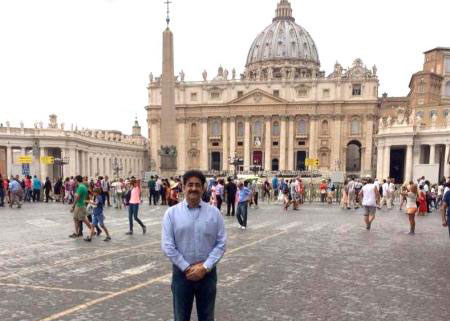