Noida: All those women who have done well must be honored to create an example for the society and for other women to motivate them to take their contribution to higher level, Dr. Sarojini Naidu Award was constituted last month and this was the second round of Awards at Noida Film City.

â€œNo society, no community and no country can prosper unless the women are giver higher status in the system. We need them at every stage, every parliament, and at every decision. Donâ€™t forget they are half of the World,â€ said Sandeep Marwah introducing International Womenâ€™s Film Forum of Marwah Studios.

Marwah gave an opportunity to every woman present on the occasion to speak her own story of achievement. A 52 episode television and radio serial were announced to give due respect to the Women Achievers.

Fri Aug 26 , 2016
Noida: International Chamber of Media And Entertainment Industry organized a National level seminar in association with Federation of Indian Small Businesses at Noida Film City. â€œWe must bring down the needs and requirements of all the small businesses on the table and must handover the charter to the Government to […] 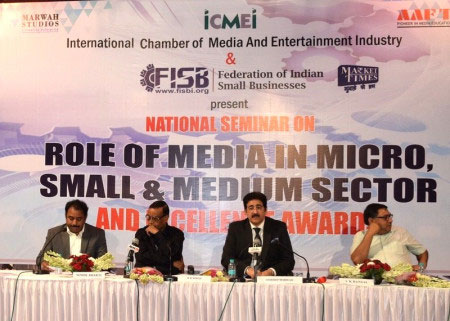