Amritsar: â€œI have decided this time to visit Jallianwala Bagh where many Indian lost there life to a wrong decision by a British General. I want to pay my tribute and my respect to all those who fought for the independenceâ€ said Sandeep Marwah President of Marwah Studios during his visit to Amritsar.

Jallianwala Bagh is a public garden in Amritsar in the Punjab state of India, and houses a memorial of national importance, established in 1951 by the Government of India, to commemorate the massacre of peaceful celebrators including unarmed women and children by British occupying forces, on the occasion of the Punjabi New Year on April 13, 1919 in the Jallianwala Bagh Massacre.

Colonial British Raj sources identified 379 fatalities and estimated about 1100 wounded. Civil Surgeon Dr. Smith indicated that there were 1,526 casualties. The true figures of fatalities are unknown, but are likely to be many times higher than the official figure of 379.

Fri Aug 26 , 2016
Noida: All those women who have done well must be honored to create an example for the society and for other women to motivate them to take their contribution to higher level, Dr. Sarojini Naidu Award was constituted last month and this was the second round of Awards at Noida […] 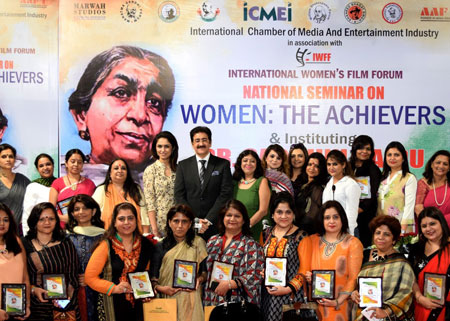