Noida Film City: International Chamber of Media And Entertainment Industry in association with Asian School of Media Studies and Association For Asian Union & Asia Pacific Region has formed a new organization under the name and banner of Indo Afghanistan Cultural Forum.

â€œWe are supporting the vision of our Prime Minister Narendra Modi of India having best of the relations with whole World specially Asian countries. We have formed Indo Afghanistan Cultural Forum to develop and promote relations with Islamic Republic of Afghanistan through art and cultureâ€ said Sandeep Marwah renowned international media personality and President of Marwah Studios.

Love, peace and unity can be attained through art and culture. I must congratulate Sandeep for initiating such a great step. He has created history by starting this organization. I am sure the love and affection of people of both the countries will work as the support to their aim and objectivesâ€ said renowned music exponent Ustad Eltaaf Hussain Sarahang who was the chief guest on the occasion and honored Sandeep Marwah with the Chairmanship of IACF.

â€œIndian films and television serials are more than popular in Afghanistan. The exchange has extended with films shot in each otherâ€™s state. The music, dance, drama, language and history has taught us about each others culture and traditions. We must continue to do so,â€ said Vijay Kumar Handoo former Director Doordarshan, Ministry of Information & Broadcasting, Government of India and Chairperson Media And Entertainment Committee of Association For Asian Union.

â€œThe terror, pain and agony people of Afghanistan have seen cannot be expressed in words. India has always gone out of way to support Afghanistan in all state of affairs. I have witnessed during my 2 years stay in Kabul,â€ added Jyoti Kalash IAS Principal Resident Commissioner Nagaland.

â€œThe Indo Afghanistan Cultural Forum has added another feather in the cap of Marwah Studios and ultimately to Noida. We are proud of Sandeep Marwah for bringing the name of Noida to the World levelâ€ said Bachchu Singh City Magistrate Noida.

Later Sandeep Marwah honored the entire guest with the life membership of International Film And Television Club of AAFT and World Peace Development And Research Foundation. 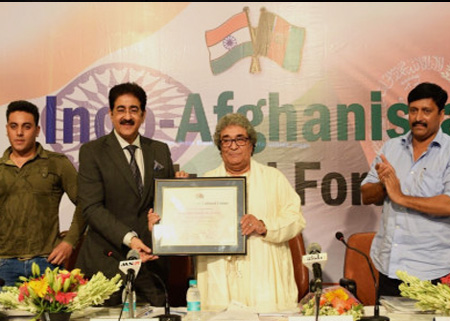