For 67 years Nelson Mandela devoted his life to the service of humanity â€” as a human rights lawyer, a prisoner of conscience, an international peacemaker and the first democratically elected president of a free South Africa.

â€œWe must recognize Nelson Mandelaâ€™s values and his dedication to the service of humanity, in the fields of conflict resolution, race relations, the promotion and protection of human rights, reconciliation, gender equality and the rights of children and other vulnerable groups, as well as the upliftment of poor and underdeveloped communitiesâ€™â€ said Sandeep Marwah Ambassador of International Human Rights Organization affiliated to United Nation in a small meeting at Hotel W Retreat & Spa Bali Seminyak, Bali, Indonesia

Sandeep Marwah President of World Peace Development And Research Centre has also been declared as a World Peace Ambassador and Global Cultural Minister many times in different international summits and conferences. Sandeep Marwah has been nominated as Chairperson of Indo South African Film And Cultural Forum by the Government of South Africa for his untiring efforts in the field of Peace and Cultural diplomacy.

Wed Jul 20 , 2016
Bangkok: â€œTourism makes up about 6% of the economy. Thailand was the most visited country in Southeast Asia, according to the World Tourism Organizationâ€ informed Sandeep Marwah Managing Director of National Federation of Tourism And Transport Cooperatives of India Limited and President of Asian Institute of Hospitality And Tourism during […] 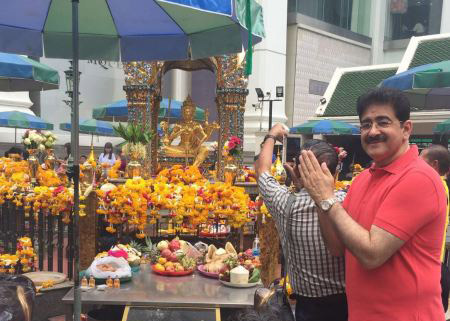