Noida: Renowned filmmaker Darmesh Darshan expressed his desire to make a short film with the young talent of AAFT while talking in the master class at Asian Academy of Film And Television at Noida Film City.

Dharmesh Darshan has directed films like Lootre, Dharkan, Bewaffa, Mela, Aap Ki Khatir and one of the first ten largest grossers feature film Raja Hindustani. Sharing his experience of 30 years in film business Darshan narrated many instances from his shooting days and his accountancies with large number of stars and technicians.

â€œI am amazed by the quality and quantity of film activities happening here in this campus. The positive vibes and a real filmi environment has made this film school as one of the best in the World,â€ said Dharmesh answering questions raised by the students.

â€œI am thankful to Dharmesh Ji for his valuable input to the institution and for sharing unwritten laws of the film industry in depthâ€ said Sandeep Marwah handing over the life membership of World Peace Development And Research Foundation.

Thu Jun 16 , 2016
Noida: The visit of H.E. Maj Gen. Vetsop Namgyel Ambassador of Bhutan to India to the international headquarters of ICMEI has added a lot to the strong relations of cultural tie-ups between the two countries. International Chamber of Media And Entertainment Industry representing the Print, Radio, Television, Cinema, New Media, […] 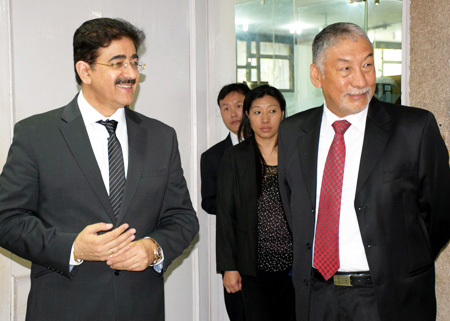