Noida: â€œNever ever heard of any film festival touching 90th Edition. My heartiest congratulations to AAFT for creating a World Record on this occasionâ€ said Gen. K.M. Seth former Governor of Chhattisgarh, Madya Pradesh and Tripura on the inauguration of 90th AAFT Festival of Short Digital Films at Noida Film City.

â€œAsian Academy of Film And Television has created a World Record in Festivals, as this is the only film festival to touch 90th Edition, which happens four times a year, which has projected 2300 films in 23 years and provided an opportunity to 2300 directors from all over the World to showcase their debut filmsâ€ informed Sandeep Marwah President of Marwah Students.

Some of the finest films were screened including SHERSINGH directed by Trilok Singh, FEEL by Mukul Verma, FIRST LITTLE STEP by Ekant Valecha, AKHIR KYUN by Anjali Kiran, MUJHEY JEENE DO by Mukul Verma, ANGELS (A DIVINE HELP) by Abhinav, PATIENT NO.19 by Abishek Kumar, ADICTION by Tejas Kapahi, REDEMPTION by Harish Kumar and JAZBA by Niharika Verma.

Later Sandeep Marwah honored Lt. Gen K.M. Seth with the life membership of World Peace Development And Research Centre and others with International Film And Television Club of AAFT.

ICMEI Presented Greetings to Country of Azerbaijan on National Day

Thu Jun 9 , 2016
New Delhi: The President of ICMEI- International Chamber of Media And Entertainment Industry Sandeep Marwah has extended his greetings and felicitations to the Government and people of the Republic of Azerbaijan on their Republic Day (May 28, 2016). In a message to His Excellency Ibrahim Hajiyev Ambassador of the Republic […] 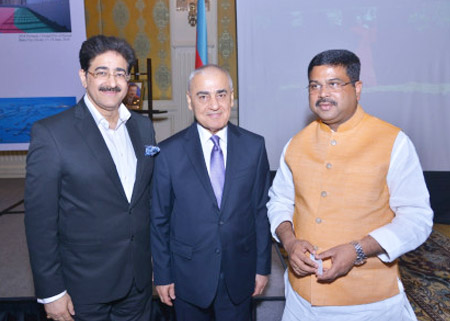