Noida: Narkis Tessler of Israel this year recipient of Icon of the Decade Award at WEF made it a point to visit Marwah Studios for an interaction with the members of International Chamber of Media And Entertainment Industry.

Narkis Tessler is a multidisciplinary manager (Director, CEO, VP), specializing in strategic implementation and management; She has repeatedly enabled and driven significant change and profitable growth.

She has held executive positions in Israelâ€™s leading retail chains and consumer brands and is currently Active Chairman of the Israel Government Tourist Corporation. She has served as director in both public and government owned companies, in industries ranging from infrastructure to tourism to security systems.

Fri May 27 , 2016
New Delhi: 17th May has been declared as the World Telecommunication Day by United Nation, a program initiated by Sandeep Marwah President Marwah Studios also Chairman for the seminar at PHD Chamber of Commerce. â€œThe purpose of World Telecommunication and Information Society Day is to help raise awareness of the […] 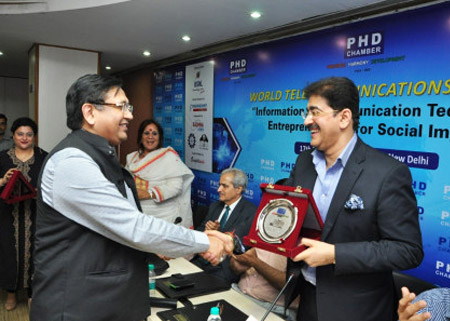