Noida: The Embassy of Republic of Guatemala is a new mission in India only three years since the embassy has been established in India. The Government of Guatemala is open for many new activities especially in the field of art and culture.

â€œWe are looking for some one who has say in media, experience in cinema and have World wide contacts. There is only one name I could suggest and that is Sandeep Marwah five times World record holder and one of the most popular media personality of India now being honored and nominated as the Chairperson of Indo Guatemala Cultural Forumâ€ said H.E. Georges de La Roche Du Ronzet, Ambassador of Guatemala to India while announcing the name.

â€œWith his vast experience in film, television and media management Sandeep Marwah can manage the cultural forum in best of the manner. He is the right choiceâ€ added Boney Kapoor renowned film maker and Past President Film Federation of India.

â€œI am charged with new energy and excitement with this new designation and shall prove my position in no timeâ€ said Sandeep Marwah accepting the memento and an honor of chairmanship.

The event was held at jam-packed hall of Marwah Studios at Noida Film City. Danilo R. Marcucci Minister Counsellor & the Deputy Head of the Mission witnessed it. 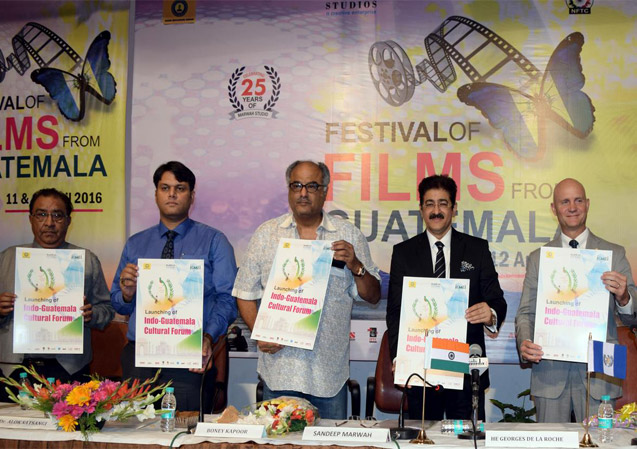