Noida: The long discussions between the Embassy of Guatemala and the board of International Chamber of Media And Entertainment Industry resulted into formation of Indo Guatemala Cultural Forum to promote and develop trade and business in relations to art and culture between two countries.

Indo Guatemala Cultural Forum was inaugurated with great pomp and show in grand function at Marwah Studios at Noida film City. A history has been written by opening the first cultural organization to promote art from Guatemala in India by H.E. George de La Roche Du Ronzet, Ambassador of Republic of Guatemala to India and star producer of Indian cinema Boney Kapoor.

â€œWhat an achievement of ICMEI that they could do it alone what many people from film industry could not do it for so many years. I congratulate both the organizations and the Government of Republic of Guatemala and Republic of India for taking such a positive step towards friendship,â€ said Boney Kapoor renowned filmmaker and former President of Film Federation of India.

â€œI trust to my best that together we will achieve the targets what we have designed under this organization very soon. I am thankful to the Government of Guatemala and H.E. Georges de La Roche for stepping out for stronger relationship and friendship,â€ said Sandeep Marwah who has been also nominated the Chairperson of the forum.

â€œWe are ready to fly from here to higher platform and I am sure rest of the World will see us flying with the friendship flagâ€ blessed H.E. Georges de La RocheÂ Â Â Â  Ambassador of Republic of Guatemala.

Danilo R. Marcucci Minister Counsellor & the Deputy Head of the Mission, Ashok Tyagi Secretary General of ICMEI, Dr. Alok Satsangi Director School of Cinema-ASMS also spoke on the occasion. The event was attended by large number of media persons from all over the country.

First Festival of Films From Guatemala at Marwah Studios

Fri Apr 15 , 2016
Noida: â€œFilms are the best way to project culture of any country. The screening of films in India from Guatemala will leave a strong impact on the audience. Not only they will realize the beauty of the country from the picturesque locations but will understand the way of life thereâ€ […] 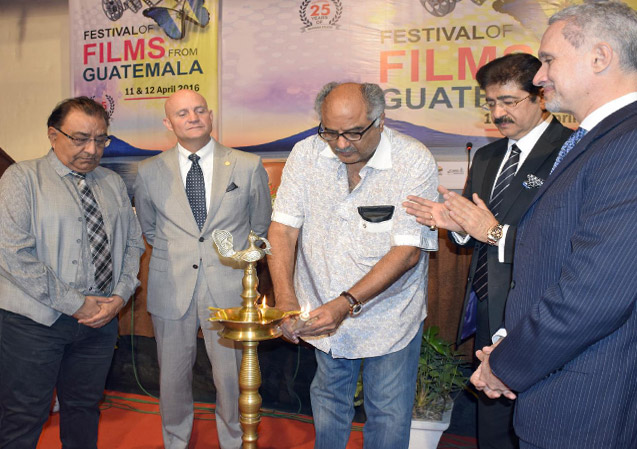