Noida: A history has ben written today when first ever Festival of Films from Nepal was inaugurated at Marwah Studios presented by Indo Nepal Film And Cultural Forum, organized by AAFT-Asian Academy of Film And Television and powered by International Chamber of media And Entertainment Industry.

â€œWhat a grand and historical beginning of the activities of Indo Nepal Film And Cultural Forum which was inaugurated by the Prime Minister of Nepal Shri K.P. Sharma Oli during his first official visit to India last month and Sandeep Marwah President AAFT was nominated as the Chairperson by the Prime Minister himselfâ€ quoted H.E. Deep Kumar Upadhyay Ambassador of Nepal to India at the inauguration of the festival.

â€œIndia and Nepal relations are as old as Indian History but these kind of gestures will bring more love for each other as cinema is bundle of emotions. I congratulate INFCF for its effortsâ€ added Ambassador.

The renowned actors from Nepal Sunil Thapa and Karishma Manandhar added a lot of glamour to the whole show. What a pleasure to be part of first ever Nepali Film Festival in India, I am touched by the actionâ€ said Sunil Thapa also known for his involvement with Hindi cinema. Sandeep Marwah is now the God Father of Nepali Cinema in India, I am sure his initiative will catch on and Nepal Film Industry will see a new light in his guidanceâ€ expressed Thapa a Nepali actor in 250 films.

â€œI am elevated with my participation in this festival. I will remember the love and respect extended to me for all time to come. I will suggest that there should be a branch of AAFT in Kathmandu,â€ said Karishma Manandhar recently been nominated the â€˜Most Popular Actress of Nepalâ€™.

Later Marwah honored the guest with life membership of International Film And Television Club of AAFT. The festival was attended by large number of film, television and media professionals and students from all over India and abroad. Large number of Nepali from different strata of life also participated.

Mon Apr 11 , 2016
Noida: One of the most prestigious International award for bringing Unity to the Asian Countries-ASIAN UNITY AWARD today was presented to the renowned media personality Sandeep Marwah here at Noida in a grand function in the presence of august gathering of Diplomats, media persons, politicians, and a group of creative […] 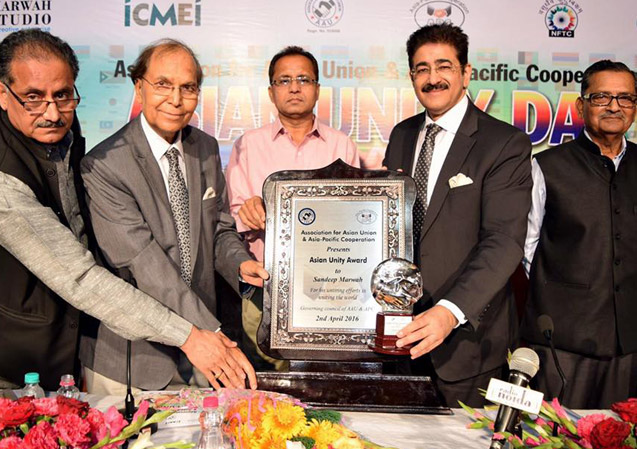