Dubai: â€œ Dubai festival has become one of the most important event of this part of the World. Thousands of visitors and tourist make it a point to be present at this month to see the real fun and fair of the cityâ€ observed Sandeep Marwah Managing Director of NFTC- National Federation of Tourism And Transport Cooperatives of India Limited during his visit to Dubai festival as special invitee.

Tourism in Dubai, the largest city of the United Arab Emirates, is an important part of the Dubai governmentâ€™s strategy to maintain the flow of foreign cash into the emirate. Dubaiâ€™s lure for tourists is based mainly on shopping, but also on its possession of other ancient and modern attractions.

Most capitals and other major cities have direct flights to Dubai. More than 120 airlines operate to and from Dubai International Airport to more than 260 destinations, making it one of the worldâ€™s busiest airports airports.

Tourism is crucial to Dubaiâ€™s economy, which had a gross domestic product of around $90 billion last year; it supports the emirateâ€™s large retail industry as well as its hospitality sector.

Occupancy at Dubaiâ€™s 599 hotels, which have 80,500 rooms combined, was 78 percent in 2012 as the number of visitors rose 9.3 percent from a year ago to 10.16 million, according to data from the Department of Tourism and Commerce Marketing

Fri Jan 15 , 2016
Noida: The most prestigious and the only festival of its kind to promote journalism in the World announced its 4th edition to be held from 12th to 14th of February 2016 at Noida Film City said Sandeep Marwah President of the festival & International Journalism Centre an international body of […] 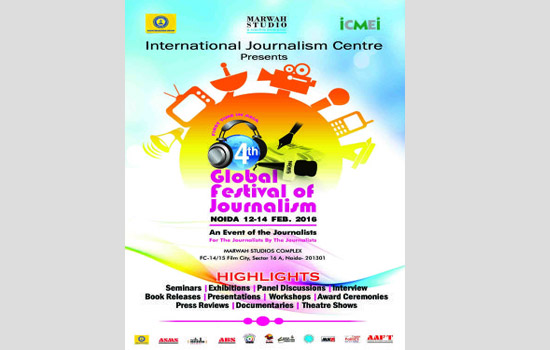