Noida: Asian Academy of Arts has been formed to promote all the fine arts including paintings, sculptures, writing, music, dance and theatre. AAA has supported large number of known and unknown painters and artist from all over the World,â€ said Sandeep Marwah President of Marwah Studio.

An exhibition of paintings of Kiran Mehra Kerpelman the Director of United Nation Information Centre for India and Bhutan was inaugurated here at Marwah Studio by H.E. Jan Luylk the Ambassador of Kingdom of Belgium to India along with Dr. Yogendra Narayan former Secretary General Rajya Sabha, A.V. Rajan former Indian Ambassador to Nepal and Raj Nidhi Sharma Secretary General of ICOU.

The energy and enthusiasm of ICMEI and Marwah Studio is infectious. I am thankful to ICMEI for making me part of this beautiful eventâ€ said H.E. Jan Luylk Ambassador of Kingdom of Belgium to India.

â€œMarwah has been rightly nominated as World Cultural Minister. He is not only promoting Indian art but whole of the World through his different platformsâ€ said Dr. Yogendra Narain former Secretary General of Rajya Sabha.

â€œI am happy to announce an International award for Sandeep Marwah from Malaysia for his contribution to art and cinemaâ€ added Raj Nidhi Sharma Secretary General of ICOU.

â€œThe dynamism of Asian Education Group and their participation in every segment of media, entertainment and art has made them an international brandâ€ said A.V. Rajan former Indian Ambassador to Nepal.

â€œI am thankful to AAA for exhibiting my paintings that is also at such a high level. My paintings depict my experience in India and mt love for each and every place I visited during my tenure in Indiaâ€ said Kiran thanking the large audience present there.

Fri Jan 15 , 2016
New Delhi; 10th December has been declared and celebrated by United Nation as the International Day of Human Rights. The social organization All India Council of Human Rights Liberties And Social Justice had a grand function at India Islamic Cultural Centre, New Delhi to honor some of the prominent personalities […] 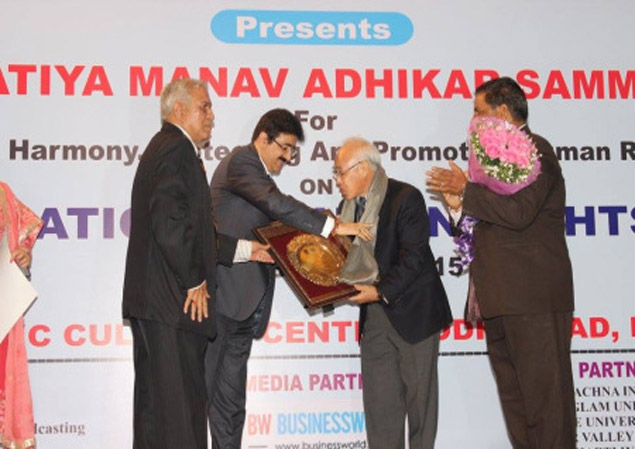