Noida: â€œMarwah Studio is the pillar of Entertainment Industry of India. I am impressed by the activities of the Centre. I am feeling important to release the poster of the most prestigious film festival of the nation,â€ said H.E. Dr. Sabit Subasic Ambassador of Bosnia And Herzegovina to India while releasing the new poster of 8th Global Film Festival Noida 2015.

â€œGlobal Media Summit is the right time to announce another International media activity,â€ added Dr. Shyam Singh Shashi. We will turn very soon Global Film Festival to the most entertaining festival of the World said Ashok Tyagi who is the festival Director of GFFN.

â€œGFFN will soon specify not only Noida, New Delhi, NCR but North India,â€ said Sandeep Marwah President Marwah Studio and Festival President GFFN. â€œAs it is we are the biggest film festival of North India,â€ he added.

The event was attended by large number of foreign delegates present on the occasion of Global Media Summit and film, television and media students from all over India.

Thu Jan 14 , 2016
The Chairperson of media and entertainment committee of Antra Rashriya Sahyog Parishad Sandeep Marwah welcomed the Prime Minister of Mauritius Anerood Jagnauth and briefed him about the activities. Addressing the second Baleshwar Agrawal Memorial Lecture in NDMC convention centre on Saturday, The Prime Minister of Mauritius talked about 181 year […] 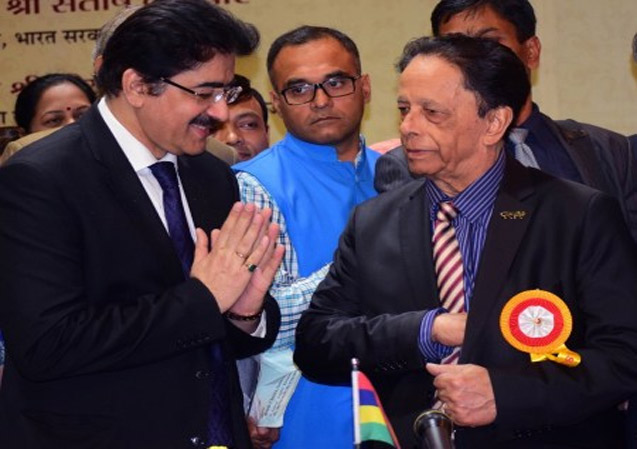