Noida: â€œNeed not worry about the technology but we have to preserve our traditions and culture for sure. It is the biggest strength of our country,â€ said Drarmendra Yadav Member Parliament from Uttar Pradesh while inaugurating the First Global Literary Festival Noida at Film City Noida.

â€œIt is great of Sandeep Marwah to plan and execute such a grand setup of Literary Festival in the first go. I am sure soon this festival be one of the best in the World like other ventures of Marwah Studioâ€ added Dharmendra Yadav.

â€œI am impressed that the festival has full emphasis on the language of Hindi. Unfortunately many festivals in India have missed on it,â€ said Ashok Bajpai former Secretary Culture Government of India.â€ Develop new literature, which should be readable by the youth. They must learn and emphasis on women too to learn about â€œ said Dr. Aziz Burney veteran writer and Journalist.

â€œI have never seen so much of energy in the literary festival any where in India. The youths have been the major participants of this festival,â€ said R.K.Mishra renowned writer from Locknow and recipient of many awards.

The federation of Publishers will leave no stone unturned to make this festival a successful one. It is the dream of thousands who were planning to have a festival of this kind and that scale. We are thankful to Sandeep Marwah for taking this initiativeâ€ said Narendra Kumar Varma of Diamond Books.

Sushil Bharti festival Director briefed everyone about the non stop 52 programs of three days to the huge crowd in the auditorium and waiting outside for series of program planned.

Sandeep Marwah conducted the program and later presented the certificates of honor to all the dignities present on the dice. Many writers, publishers, poets from all over India and abroad attended the inauguration.

Wed Jan 13 , 2016
New Delhi: Films, television, media, art and culture promoter Sandeep Marwah is now the patron to our organization. His contribution to the nation in music is also worth praising,â€ said V. K. S. Sood the Chairperson of Sangam Kala Group while presenting the honor to Sandeep Marwah at Rail Bhawan […] 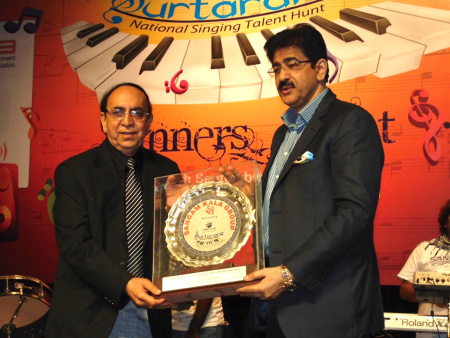