Noida: The first Global Literary Festival Noida 2015 is also here to promote Literature as well as art and culture of India. The promotion of music, singing, dance, drama, paintings are going to be a big part of these three days setupâ€ informed Sandeep Marwah festival president on the first day to the large audience at the inauguration of cultural cell of the literary festival.

â€œWhat a grand show to project our literature, art and culture Never ever anyone earlier thought of this kind of festival in NCR. I appreciate the efforts of Marwah Studio for taking initiatives. No literature can survive without culture and vice versa. I wish the festival should leave a huge impact on the citizen of Indiaâ€ said Balbeer Punj Member Rajya Sabha.

Managing Director of Diamond Books Narendra K Varma emphasized on writing books on our culture and arts. Writer and Festival Director (Coordination) Pankaj K Singh requested everyone to have small library in their house to start with.

Women Are Half of The World-Respect Them- Sandeep Marwah

Wed Jan 13 , 2016
New Delhi: A country, which has believed in Goddess, cannot go wrong in respecting women and giving them full respect in the society and every field where they feel like. Time has come when we have to provide full space to women to express their emotions, capabilities and capacitiesâ€ said […] 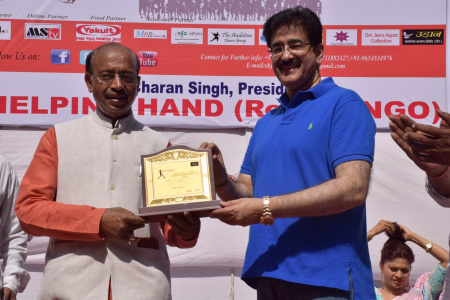