Noida: â€˜We have added another feather in the cap of Marwah Studio by launching a forum after the name of one of the biggest name in literature, social workers and nationalist-Deendayal Upadhyayaâ€ introduced Sandeep Marwah President First Global Literary Festival Noida 2015.

â€œWhat a wonderful occasion to launch Deendayal Upadhyaya Forum at the first Global Literary Festival when thousands of people who think alike are here to contribute the literature of the nation. I congratulate Sandeep Marwah for his efforts and patriotismâ€ said Prof. Dr. Ram Shankar Katheria Minister for State, Ministry of Human Resources Development, Government of India while inaugurating the International Forum.

Only those people can bring change into the system who are daring and have strong determination, Deendayal Upadhyaya was one of them. He was nationalist, patriotic and loved literature. From nowhere to the books of Indian history, it is worth reading about him how he developed the feeling of oneness,â€ said Inderesh Kumar Singh of Rashtriya Sewa Sangh.

Wed Jan 13 , 2016
Noida: The literature and music promotion go hand in hand. They can not be separated as literature and music are part and parcel of our lifeâ€ Sandeep Marwah President of First Global Literary Festival Noida introduced Rajendra Prasanna to the audience as one of the biggest and famous Flute Player […] 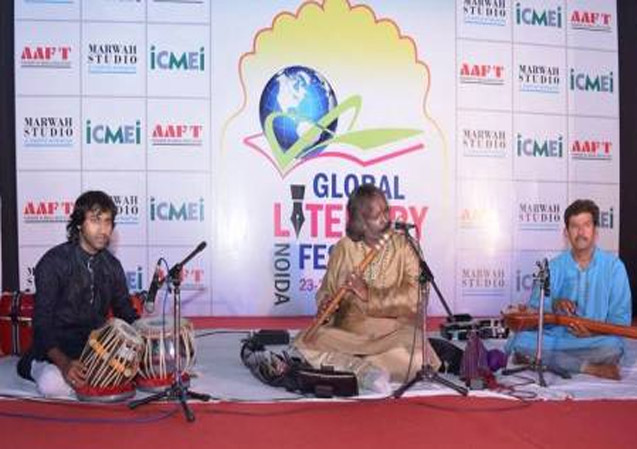