New Delhi: AMRITA â€“ A SUBLIME STORY is a play directed by the legendary Director, M.S. Sathyu of â€˜Garam Hawaâ€™ fame, and was staged at the India Habitat Centre. It was a real experimental play, the story of the late Amrita Pritam, a literary genius of India who passed away a decade ago.

â€œI am proud of Lovlin for her excellence in presenting Amrita Pritam on stage. She brought Amrita back to lifeâ€ said Sandeep Marwah President of Marwah Studio appreciating the efforts of AAFT alumni Lovlin who stole the show.

â€œI have never met Amrita Pritam, but after seeing this play I know a lot about this great personalityâ€ added H.K.Dua a veteran journalist and a writer.

â€œWorking under the internationally acclaimed director MS Sathyu was nothing short of a pleasure, since I had worked with him as his leading lady in Sookha and Barra, Sathyu gave me all the freedom to interpret Amrita in my own spontaneous style.â€ expressed Lovlin thanking the large audience on that day.

Sandeep Marwah Honored For His World Record in Sports 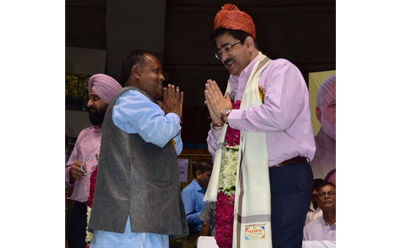