Noida: â€œ Multimedia has taken over not only all the mediums of media, but its intervention in all other businesses is now unavoidable. Animation has emerged as a new industry all over he World. It is high time to make people aware of its qualificationsâ€ said Sandeep Marwah President of ICMEI and Marwah Studio signing an arrangement with Soumendu Sinha for forthcoming Animation Festival.

â€œWe have designed this animation festival at Hotel Meridian in October. Many international and national companies have started finalizing their participation. We want it to be very exclusive. With ICMEI coming in we have upgraded the standard of the festival â€œ said Soumendu Sinha Director of the festival.

Javed Jaffari renowned film artist has been nominated as the brand Ambassador of IIACFF-2015.

Babbitta Saxena Chairperson for International And National Event Committee of ICMEI assured full support to the festival in the coming weeks. Marwah Studio and AAFT will be partners in progress with India International Animation And Cartoon Film Festival. 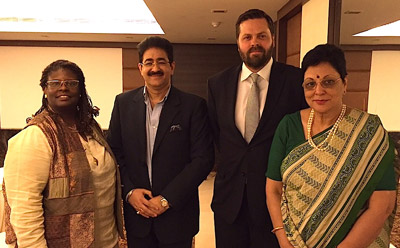