Noida Film City: The management of International Film And Television Club has decided to have the next Global Film Festival Noida 2015 on 18th to 20th November.

The film festival, which has created a wonderful niche for itself all over the world has been rated as â€œthe most happening film festival of the Worldâ€.

â€œInternational Film And Television Club will start working for its next edition from today onwards to make it once again as one of the most interesting festival on earthâ€ said Sandeep Marwah President of the Club.

ICMEI And Country of Bulgaria Will Promote Art Together

Sat Jan 9 , 2016
Noida Film City: â€œICMEI has done a commendable job in short period of uniting world through art and culture under the leadership of Sandeep Marwah. We want to be part of this mission,â€ said H.E. Petko Doykov Ambassador Extraordinary and Plenipotentiary of the Republic of Bulgaria to the Republic of […] 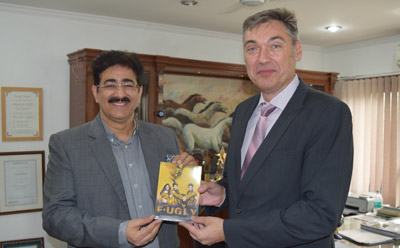