Noida: â€œYouth is the future of the country. Develop good habits and culture so that the country can change with your positive attitude. Media plays a very important role in developing country and in educating masses about rest of the thingsâ€ said Dr. Bhisham Narain Singh the former Governor of Tamil Nadu and Union Minister on the inauguration of 88th batch of AAFT.

â€œOn visiting the premier film school of India-AAFT, I am more anxious to be part of Indian Film and television Industry. I am sure this institution can be a great instrument in developing relations between two countries India and Malawiâ€ added H.E. Patrick Mphepo Deputy High Commissioner of Malawi in India.

Sat Jan 9 , 2016
Noida: â€œWhat an excitement that whole World is celebrating World Yoga Day and our Indian traditions and culture are spreading all over the globe in no timeâ€ said Sandeep Marwah President of International Chamber of Media And Entertainment Industry on the World Yoga Day at Noida. More than 2000 people […] 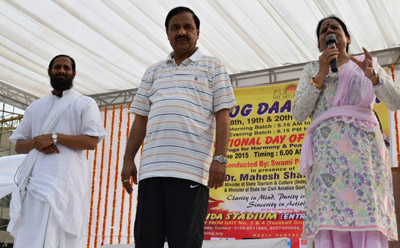