Noida Film City: â€œIndia is a powerful country and it has its own foreign policy of peace and unity. Our Prime Minister is keen in developing smart relationship with the rest of the countries of the Worldâ€ initiated Sandeep Marwah on the first day of workshop on Diplomacy and Foreign Affairs at ICMEI.

â€œA lot can be done not only by the Government but individuals and business organization in projecting India as a developed and cultured nationâ€ said Ambassador Shashak Former Foreign Secretary of Government of India while inaugurating the Workshop at International Chamber of Media And Entertainment Industry at Noida Film City.

Dr. Madhup Mohta suggested to everyone present there to keep the passport ready for the opportunity abroad. Ambassador K.P. Fabion shared his vast experience of Foreign Service. Narayan Kumar of Indian Council of International Cooperation highlighted the activities of the organization.

Powerful Workshop on Diplomacy And Foreign Affairs at ICMEI

Fri Jan 8 , 2016
Noida Film City: â€œThe students and professionals must have information and knowledge about diplomacy and foreign affairs of India to look better prospects in jobs and businessâ€ said Sandeep Marwah President of International Chamber of Media and Entertainment Industry at Marwah Studio introducing the high profiled guests on the second […] 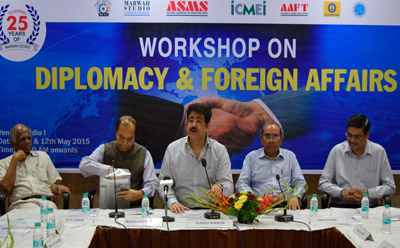