Noida Film City: â€œThe students and professionals must have information and knowledge about diplomacy and foreign affairs of India to look better prospects in jobs and businessâ€ said Sandeep Marwah President of International Chamber of Media and Entertainment Industry at Marwah Studio introducing the high profiled guests on the second day of workshop.

â€œEveryone must read the international news to gain knowledge about international policies and our transactions with foreign countries. I am impressed by the workshop at media Centre, it should happen now and then,â€ said Ambassador Shashank former Foreign Secretary, Government of India while answering the questions during the session.

Fri Jan 8 , 2016
New Delhi: â€œEvery Indian must learn that he has to live in the place which should be neat & clean and he must plant and preserve some trees around him. The whole country will become a beautiful place,â€ said Sandeep Marwah President Marwah Studio on the 12th foundation Day of […] 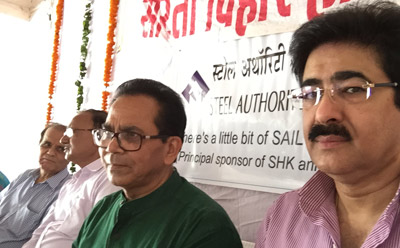