New Delhi: â€œICMEI-International Chamber of Media And Entertainment Industry is the only chamber of its kind in whole of the World. We have so far opened 162 international committees and 80 national committees with contact office in 100 countries. More than 15000 members are directly connected to it nowâ€ said Sandeep Marwah President of the Chamber on the second day of Edutainment Exhibition at Hotel Lalit, New Delhi.

â€œThe purpose of the Chamber is to bring the whole world close to each other through art and culture including films, television & mediaâ€ added Ashok Tyagi Secretary General of ICMEI.

â€œWe are getting support from all the governments of different countries to develop relations and business in this field. We hope to bring in large chunk of media business into the countryâ€ expressed Marwah answering to the questions asked by the audience. Edutainment and ICMEI will work together in promoting media education in India.

Fri Jan 8 , 2016
New Delhi: â€œNoida Film City is the fastest growing film city in the World established in 100 acres 75 acres outdoors and 25 acres indoors comprising of 16 studios, 350 channels being broadcast to 162 countries 24Ã—7 from this place. Approx. 17000 people are working in and around Noida in […] 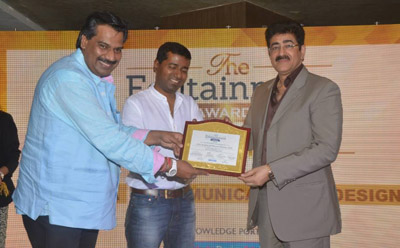