â€œWe have planned especially the book release of a film personality to coincide with the film festival â€œ said Ram Kishore Parcha President of the festival.

â€œThe book has covered all the pluses and the minuses of Rajesh Khannaâ€ said Ashok Tyagi Secretary General of ICMEI and the director of feature film RIYASAT, last film of Rajesh Khanna.

â€œI have researched a lot before writing the book, the works of Rajesh Khanna are more than just one book. I have tried to give my best in it interestinglyâ€ expressed Usman. The event was attended by a large gathering at the festival.

Fri Jan 8 , 2016
Writing is not only a very important part of filmmaking but our day to day affairs. Very few people can take up the assignment of converting their expression into the shape of bookâ€ said Sandeep Marwah President of Marwah Studios while releasing the book of Sanjay Sinha. The event of […] 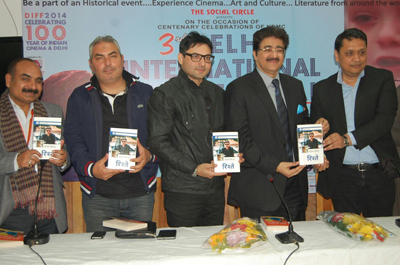