We are proud that Mexican girl Ximena Navarrate has attained a tittle of Miss Universe 2010 and also she is the recipient of Post Graduate Diploma from AAFT Noida and now World Ambassador of Asian Academy of Film And Televisionâ€ informed Sandeep Marwah President of Marwah Studio and Chairperson ICMEI during his meeting with the Ambassador of Mexico H.E. Jaime Nualart at New Delhi.

â€œI understand the importance of Art And Culture and believe that it can bring two countries close to each other. We have ample scope to develop the relations between two countries through cinema and other atrsâ€ said H.E. Jaime Nualart Ambassador of Mexico in India.

The secretary General Ashok Tyagi handed over a prospectus of ICMEI to Ambassador.

Wed Jan 6 , 2016
It is our pride to bring first Polish award-GATE OF FREEDOM Award to India when Sandeep Marwah was honored at Gdansk Film Festival for his five World Records and later invited to be on the International juryâ€ informed Ashok Tyagi Secretary General of ICMEI to H.E. Tomasz Åukaszuk The Ambassador […] 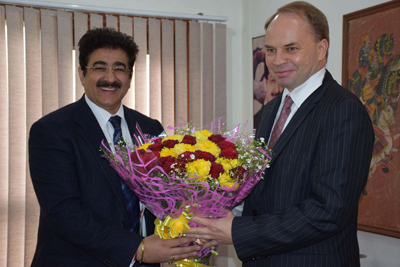