â€œWe have to begin from somewhere to add on to the betterment of our relations art and culture is the best and the fastest way. We are confident that ICMEI will play its role with great responsibilityâ€ said H.E. Thorir Ibsen Ambassador of Iceland in India on his meeting with the Chamber.

â€œIt all began when two students from Iceland came for the first time to India on education visa to study films at AAFT. We decided to promote relations so that much more can be planned with Icelandâ€ said Sandeep Marwah President of International Chamber of Media And Entertainment Industry.

Embassy of Iceland and ICMEI will plan together a film festival, student exchange, faculty exchange, media school collaboration, interaction program with vising personalities and program on tourism in the next few months.

ICMEI has invited H.E. Thorir Ibsen Ambassador of Iceland to the chamber to have interaction with media persons informed Ashok Tyagi secretary General of ICMEI.

Wed Jan 6 , 2016
Noida-12th Feb, 2015:Delegates from more than 30 countries of the World and from all the states of India brought 3rd Global Festival of Journalism to the most exclusive and one of its kind journalism festival in the World with the formal inauguration on the International Day of Journalism. â€œI am […] 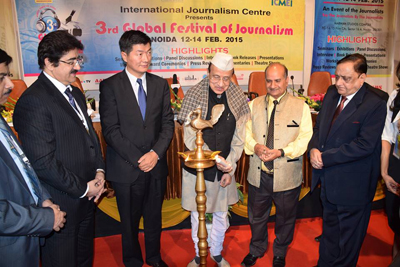