Noida 15th Jan, 2015: â€œThe 8th festival of Cellphone Cinema speaks for itself the demand and fun in celebrating these kind of unique film festivals in the world,â€ said Gulshan Grover renowned cine artist while releasing the first poster of the festival at Marwah Studios, Film City Noida.

â€œ8th International Festival of Cellphone Cinema has been fixed for 29th and 30th of January where short films upto three minutes shot by mobile phones have been invited from all over the Worldâ€ informed Sandeep Marwah President of the Festival.

â€œIt is a wonderful opportunity for the young film makers to project their ideas in such a economical wayâ€ added Rahul Mittra film producer from Mumbai.

â€œI am ready to provide music to these short mobile films. It is a challenge to give music to three minutes filmsâ€ expressed a well-known singer and composer Vipen Aneja.

Wed Jan 6 , 2016
You need to be punctual, regular, sincere and dedicated at the time of your education and training program. Treat it as your first priority. Learn the best out of AAFT, this time will never come backâ€ said Gulshan Grover renowned actor from Bollywood at an interaction program at Noida Film […] 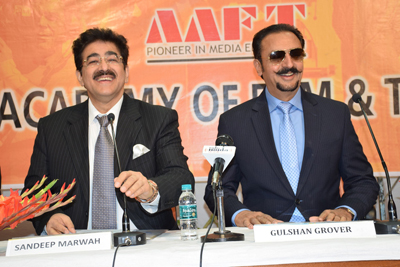