Noida Film City: The evening of the first day of 3rd Global Festival of Journalism Noida 2015 saw the most attractive beginning of opening of Documentary film festival at theatre D of Marwah Studio.

â€œIt is a proud moment for the organizers of Documentary Film Festival as we have received films from all over the World. Films are from 5 minutes to 55 minutes and projecting from social problems to personal achievements of peopleâ€ said Sandeep Marwah President of the festival.

The guest Demis Johnn from Surinam, Ivan Ryazanov from Russia and Mohammad Shamim Rana from Bangladesh along with renowned writer Dr. B.L. Gaur Chairman Gaursons India Ltd. inaugurated the festival, which was followed by the screening of some foreign and Indian documentaries.

Wed Jan 6 , 2016
Noida Film City: one minute silence was observed by the complete auditorium even before the beginning of the program to pay tribute to the great soul late shri R. K. Laxman the most reputed and popular cartoonist of the country on the opening day of 3rd Global Festival of Journalism […] 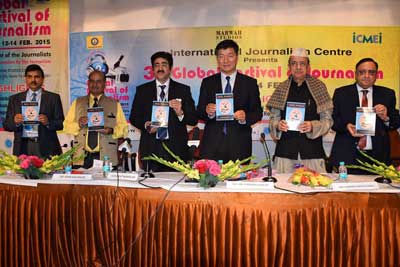