It was decided to open the new batch of Asian Academy of Film And Television on 12th February which is the National Youh Day and also the Birth Anniversary of Swami Vivekanandâ€ said Sandeep Marwah President of AAFT addressing the young media persons enrolled in the 86th batch of the institution.

â€œWe have to learn from the sayings of Swami Vivekanand. Who is Helping You, donâ€™t forget them. who is loving you, donâ€™t hate them who is believing you, Donâ€™t cheat them. Anything that makes you weak physically, intellectually and spiritually, reject as poison. Fill the brain with high thoughts, highest ideals place them day and night before you and out of that will come great workâ€ added Marwah in his speech while motivating the young crowd of AAFT.

All the faculty members of AAFT attended the meeting. It was a good holy start. Students were also briefed with the activities of World Peace Development And Research Foundation.

Boney Kapoor On The Board of ICMEI

Wed Jan 6 , 2016
Boney Kapoor has been nominated on the Governing Council of International Chamber of media And Entertainment Industry the first ever Chamber to look into the needs of this industry. Chamber will play an important role in bridging the gap between industry and government. Chamber has created 162 international committees 80 […] 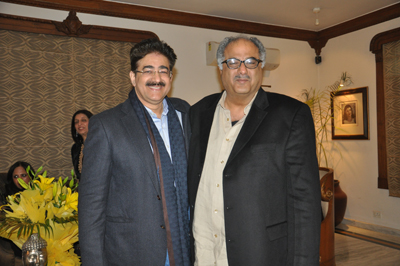