â€œIt is important for an actor to perform the character in best of the manner possible, with best of capabilities and capacities, it will automatically show on the screenâ€ said Prem Chopra a veteran actor at AAFT at Noida Film City.

The presence of Prem Chopra has added a new energy to the campus, his each and every performance speaks about his caliber and experienceâ€ appreciated Sandeep Marwah President of Marwah Studios in a jam-packed hall at Marwah Studios.

â€œFilms and culture together can bring peace and love. Films are still a powerful source of entertainmentâ€ said Edit Osko a well known social worker from Budapest, Hungary.

Tue Jan 5 , 2016
New Delhi, 3rd Dec.2014: An evening full of excitements-food, drinks, music, dance, art and a powerful fashion show at the thriving colorful lighted grounds of Hungarian Embassy added a lot to the relationship with Indian art and culture circle of Delhi. â€œWe are open to new-fangled and contemporary ways of […] 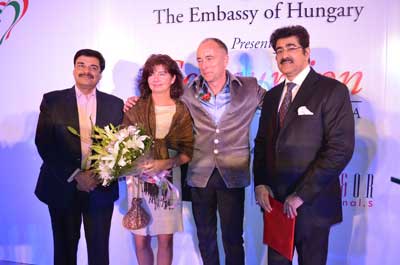