Sandeep Marwah, Managing Director of National Federation of Tourism & Transport Co-operatives of India Ltd., greeted all the delegates. â€œTourism plays a predominant role in the world economy and certainly espouses national integration and brotherhoodâ€, said Sandeep Marwah, the Ambassador of International Human Rights Organisation affiliated to United Nations .He also a read a message from Bann ki-Moon and announced that NFTC will convene the 7th International Conference on cooperatives to coincide with the AAFT 7th Global Film Festival Noida 2014.

Convocation of 84th Batch of AAFT at Noida Film City

Tue Jan 5 , 2016
Noida â€œBe focused, have strong determination, be ready for sacrifice, have enthusiasm and love for your profession will always take you to successâ€ said Sandeep Marwah President of Marwah Studios to the young aspirants passing out from the 84th batch of AAFT on the day of convocation at Noida Film […] 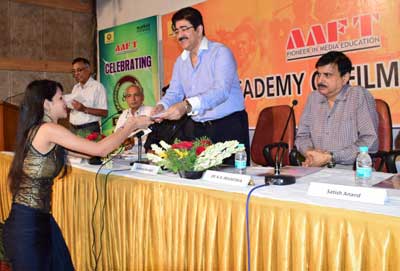