The biggest launch of this year is not any film or product but the launching of first ever International Chamber of Media And Entertainment Industry in the Worldâ€ said Sandeep Marwah President of 7th Global Film Festival Noida 2014 on the first day of the show.

â€œThere is no business bigger than show business, Entertainment industry is the biggest industry in the World. It is our good luck that first ever only chamber on media and entertainment has been formed and declared by us todayâ€ added Marwah in a over crowded function attended by thousands of media persons at Marwah Studios.

Tue Jan 5 , 2016
â€œIt is the custom at Global Film Festival to honor cinema persons who have contributed to the growth and style of Indian Film Industry. Vivek Agnihotri is also one of the namesâ€ said Sandeep Marwah President of 7th Global Film Festival Noida while handing over the award at Marwah Studios, […] 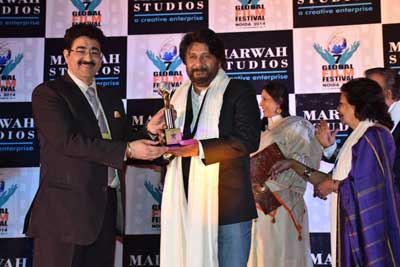