New Delhi: The 14th Indo US Summit closed with the segment on Media and Entertainment under the chairmanship of renowned international media personality Dr. Sandeep Marwah President of Asian Academy of Film And Television at Hotel Hyatt, New Delhi.

The session emphasized on Multiplying Screens of Popular Cinema. Sandeep Marwah took the initiative and briefed audience with the statistics of Indian Cinema in comparison to US Cinema.

Later Summit Chair & Executive Vice President Indo-American Chamber of Commerce Dr.Lalit Bhasin presented memento to the entire guest and closed the session by thanking all the speakers on the dice.

Tue Sep 25 , 2018
Noida: The most popular bank HDFC honored the President of Marwah Studios Sandeep Marwah with Creative Award for his contribution to the films, media and other segments of creative World. “We are feeling honored to present this memento to Sandeep Marwah six times World Record Holder a token of love […] 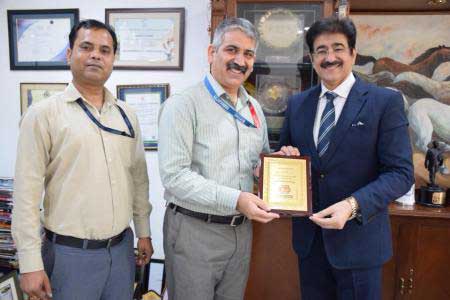