ASMSâ€“Asian School of Media Studies has grown big in its size and quality. The films made by students of cinema have all those contents, which we actually want to see on the big screen. They are now part of 7th Global Film Festival Noida 2014â€ said Sandeep Marwah President of GFFN.

â€œWe have included films of ASMS as they speak differently and are really pieces of art,â€ said Dr. A.K.Srivastava Director of ASMS who introduced the 11th ASMS Festival of Short Films to the large audience at GFFN.

â€œI am impressed by the quality of work this time students of cinema from ASMS has presented. Its worth projecting at many other international film festivalsâ€ said Dean AAFT.

The former student of AAFT and now super star of Haryanavi Cinema Uttar Kumar inaugurated the 11th ASMS festival and said, â€œI congratulate all the participants and hope that all of them will soon can be seen on the big screenâ€.

Tue Jan 5 , 2016
I am indebted to my institution for putting me on such a huge platform today at 7th GFFN and showcasing my feature film Dear V/S Bear an experimental film before a large and educated audienceâ€ said Uttar Kumar renowned star from Haryana and former student of Asian Academy of Film […] 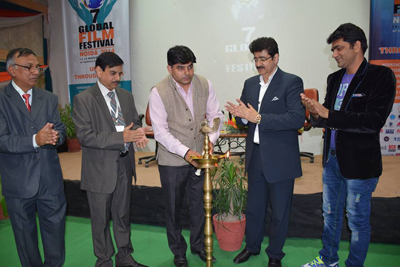