Delhi: An Exhibition on Jalliawala Bagh incident took place at the Indra Gandhi National Art museum on 21st April 2019. The Exhibition was displayed in the memory of the innocent people who were martyred on 13th April 1919.

The Exhibition exhibited many documents and historical artefacts about the incident at the museum. It is said that more than 500 people died in Jalliawala Bagh situated in Amritsar. Still marks of bullets can be seen at the walls of Jalliawala Bagh ground. This happening of the past gave a huge set back to the people then and revolt started in all parts of India.

The Exhibition on Jalliawala Bagh Centenary, a commemoration exhibition was in display from 13th April 2019 to 28th April 2019. There were recordings available translated in both Hindi and English for the people to listen about the opinion what happened then at Jalliawala Bagh in 1919. Also translated recording of the people who were present at that time when the incident took place.

Many people came to witness the Centenary and offered rose as a mark of respect in the artificial well which was made as a replica of the original well. There were portrays of the incident. Flogging Post where the British people used to tie Indians and beat them during the imposition of Martial Law. An Artificial Jail was created to pay homage those who were present under Martial Law. Dummy bullets were placed (Mark 6) rifle fired at Jalliawala Bagh.

Beside all this there were documents about the historic movements which took place in 1919 like Satyagrah, Civil Disobey movement etc. There was a special room made which could visualise the heart drowning firing on innocent Indians with their names as they were being shot at the bagh.

Asking about the experience of the visitors, they said that they were quite able to visualise what may have happened at that time in 1919. It was quite a learning experience for the young kids who were not that aware about the happening. It made them realise the cruel occurring which took place in the past.

Wed May 8 , 2019
New Delhi: Dairy of a Young Girl where a girl lived through the pages, the author being none other than Anne Frank, her Exhibition was displayed at India International Centre from 21st to 28th of April 2019. A young girl of 13 years who never thought that she would be […] 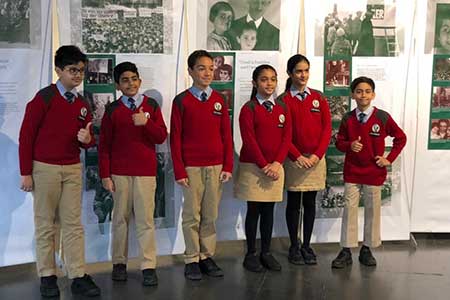